Ok
It's actually a very nice resort however it's about as pricey as it gets is it worth it I'm not so sure, right next to the 101 freeway also it's about as noisy as it gets! However it's very close to a deserted Beach literally right around the corner from it which does make a positive difference staff was very friendly however security was very good I would probably go back simply because of the proximity of Ventura in the surrounding area choices are pretty small.

Un safe place, next to river where people live in bushes they come out at night to steal your stuff and sell for food/drugs.Worse location floods,when rains !!and charged way to much!! Next to freeway and train tracks it was very noisy!! Staff was not friendly cashiers lady’s were not friendly.neibours where loud played music all night!! Think god for freeway noise helped me sleep!!sounds like a river flowing after a while.next time I’m staying at emmawood Rv park on the beach its 1/8 the price!! State park good security!!!

Just Okay
This was our 4th and most expensive stop on a week long trip. Saddly it was also the most uncomfortable. Their policy states that vehicles cannot block the road at each site yet almost every site around us had vehicles sticking out making it difficult to maneuver such large vehicles in and out of spaces. We saw atleast 3 large campers take over 15min to pull out of their sites trying to avoid hitting something. The wrist bands are silly. No one enforces them just like the parking on the street. Staff was friendly and overall things were pleasant but it did feel greatly over crowded for the price. We received 3 pages of information at check in but nothing about wifi codes, or quiet hours. This was the only site I felt inclined to write a review about because of how diffirent our experience was.

Awful!
Made a reservation for a 4 day stay in July for what was supposed to be an enjoyable weekend of camping with our two young grandkids...the first night was ok but the second afternoon saw an influx of weekend campers with rental RV’s. One particularly inept Class C renter ended up next to us. He apparently dumped his black water on the pavement and it all rolled in to our site. When we asked for help from the front office, they sent a maintenance worker with a hose who proceeded to wash the effluent down hill from our site to the roadway adjacent to our row of campsites. Now there was a health/haz mat scenario that should have resulted in the expulsion of the responsible party. We had to throw away chairs, mats and hoses that were laying in the brown water from his mess because we had no way to decontaminate them at the campground. When we asked to be relocated they said they were “full”. When we said that we were leaving as the stench was awful they couldn’t care less! Terrible place!

Great Customer Service - Appreciated
We planned a trip on a holiday weekend. Our tow vehicle had mechanical problems. The resort worked with us and made us happy campers. Thank you

So So
Stayed for 3 nights starting on Friday. Down sides include freeway noise, not so friendly staff, price and the dirt removal that started on Monday morning with dump trucks behind our site without regards to dust. Upside pool, spa and kid friendly activities. Our granddaughter had a great time which made it all worthwhile.

Very Pretty And Clean
My husband and I stayed here for the weekend. Very pretty with trees and grass everywhere. Staff was very friendly and the park is well maintained. The freeway can be a bit noisy so I dont recommended the non premium sites. We stayed in spot 92 1/2 and it had plenty of room. The Beach that is about 5 minute bike ride away is too rocky for swimming so you will have to go a bit further.

Thieves!
Thieves! I checked in here for an extended stay. It cost me $1800 a month for a spot 100 feet from the freeway. Half way through my first month the park flooded and evacuated. I asked the staff the day before if I should be concerned and was told no. The day of the flood they didn't call me for four hours after they were notified of the evacuation. By the time I got there 30 minutes later I was in waist high water. I lost over a $1000 worth of gear and $2500 in damage to my coach. I couldn’t risk more damage so I moved moved out and they wouldn't even refund the rent for the last two weeks. Stay away if you're smart.!

Terrible. Horrible 28 Days
We are a military family transition to California from Alaska. We stayed almost 30 days. It was horrible. I would never recommend anyone stay here as the staff was rude and not flexible at all. The parker has decent facilities but an insane parking policy. There are tons of homeless people in the area and if you have an extra vehicle it will not fit neatly near your rig...unless you are in the VERY expensive pull through slots. The road noise from the Hwy 101 is amazingl loud. We have RV'ed all over this continent and never had such a bad time. This RV parked has a big "Support the Troops" sign but does give a military discount. I would NEVER recommend this place.

Stay Away
Not worth it. Bad attitude. Very disappointing

This place was clean and pleasant staff. Warning- if you want to sleep nights, go elsewhere. ALL night long the sound of traffic just yards away is horrific. Also, they make you wear colored wristbands at all times and charge $5 for each dog. A neighbor in the park told me to lock up everything at night as people come up from the river at night and wander about. For the outrageous price- not worth it.

Flying Flag RV Resort is a A1 first class RV resort. Stayed there three nights in April. Came in on a Saturday afternoon and the park was full with campers and activities, yet every thing ran relatively smooth even after we were given the wrong site. Things were resolved in about fifteen minutes and we pulled in to our correct site. From that point on our stay was as smooth as butter, by Sunday afternoon the park as extremely quiet and peaceful. Even at the peek of activities the park and the facilities were clean and orderly. This was our third visit to this park in the last nine months and will definitely not be our last. Clean, orderly with great amenities love Flying Flags.

Amenities Listed Wrong
You would think for the amount of $$$ they charge you would get cable tv, but NO cable. We’re here for two nights.

We like to go to cool down on the hot summer days, so it's good for that. Spaces are tight but well maintained. Well stocked store, close to Vons and other shopping. Kids enjoy riding bikes, they run a shuttle to downtown on weekends and holidays. If your a bigger rig it can be tight in places(were 40' fifth wheel), people park in street not on there spots which makes it even more challenging. It is pricy, so we only go a couple times a year. Since the flooding they did a nice job cleaning up and fixing up!

Used To Like This Place
I really liked it here. I never really heard the freeway didn't bother me at all. My motorhome broke down and I was stuck for a few days. The management charged me everything I brought my vehicle in to work on the rv. They told me I couldn't work on my motorhome and I said how am I suppose to get it running then. They were not understanding at all and charged me so much money. They even charged me for the tow truck just to drive in added another vehicle charge ridulous!

REFUND FOR MEMORIAL WKND 2017
We completely understand the flooding was worse than expected. On March 15th your email stating that the re-opening was pushed back again and you would be refunding Memorial weekend was met with sadness but understanding. HOWEVER, it is now APRIL 22nd and there is NO REFUND YET ! The excuses that the insurance is holding up the refund is unacceptable. Not only was it too late to book somewhere else but you still owe me OVER $400. Such a shame, because we used to love it there.

Keep Driving
It's ok for a day at the beach, but overnight forget about it. The freeway noise is never ending and not worth the money.

Its a beautiful park to see....the highway is very close en really noisy, but that we knew before we arrived. So I think its to expensive, so close to the highway. The beach is close by but its not a place to go for a day...then you have to go further away. On some RV site there is a lot of dog pooh. The wifi is not so good but its works. The staff is very nice and helpfull.

Pricey, Cramped
You are on the bluff overlooking the sea. Beautiful view. Spaces are cramped, not the rack n stack of the "parking lot" rv parks, but still no green space between you and the next bus. Management had an attitude. ..

Good location except for freeway noise. $4.29 for a bag of ice!!! Are you kidding me?

Stay Away!
Extremely expensive and space is extremely cramp. No privacy and we hated being there. So many rules and restrictions and pay $4 for a pet for each night. Would not come back.

The 101 freeway is loud all day and night. Get a spot far from the freeway. The grounds are very nice. Biking distance to Pier.

Kinda Cool
A little noisy from the freeway, amenities were awesome. One security guard got way way out of line..hopefully management handled it for the future... all and all it was pretty cool and a lot of fun....

NEW YEARS FAMILY CAMPING TRIP
Let me start by saying this trip was upland a last minute crazy mad dash for something to do for new years ....it was awesome the park is close to some way cool beaches and I loved it hot showers and felt safe

Not Worth The Money
I think his problem with this RV park and since proximity to the freeway where you never escape the constant noise, it's probably worse for the people in tents, they never get a break for the money I would choose someplace else. The only good thing about this park is there a beach access via the tunnel that goes on the freeway but other than that I would choose something else. 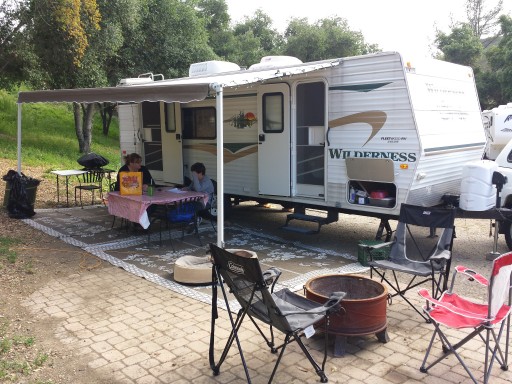 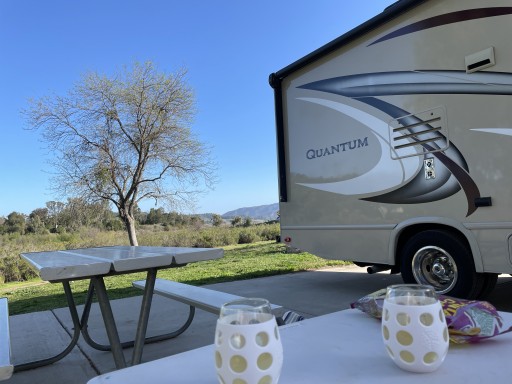 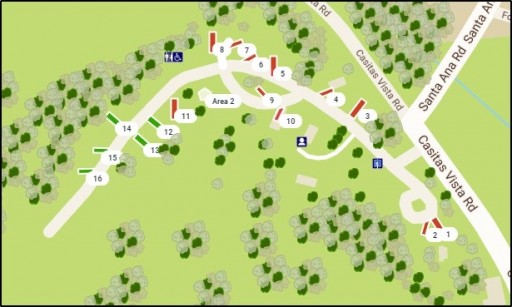 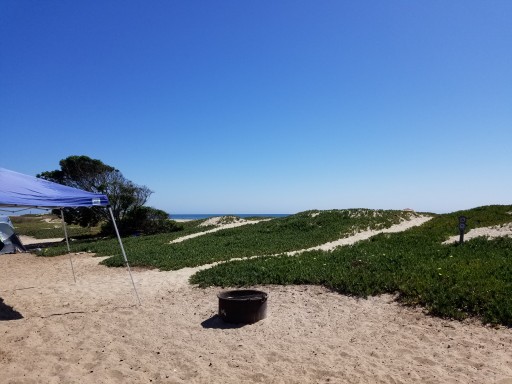 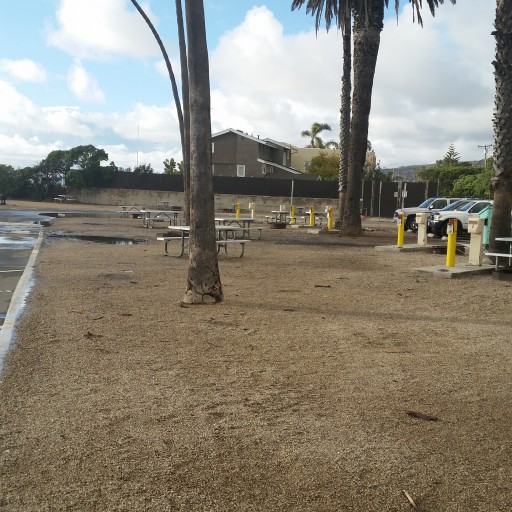